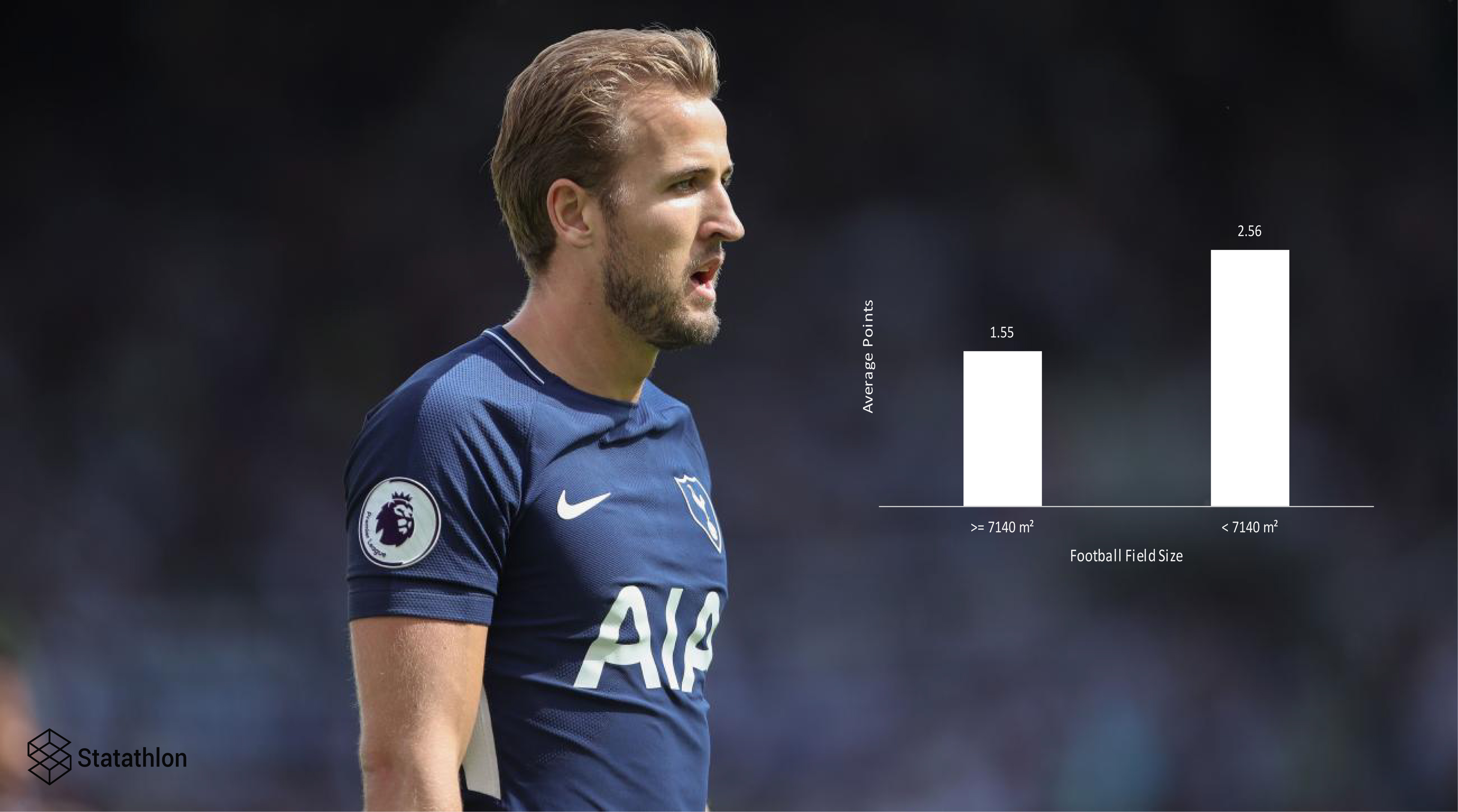 In the past three years Tottenham Hotspur has entered in the elite of Premier League clubs. Mauricio Pochettino and its fully talented squad have successfully created a unique style of football that not many teams in the Europe can compete.

All these tactics that transformed the team into an invincible football machine had been developed in training grounds for small fields. White Hart Lane, the Premier League’s third smallest football field was the home for Spurs for more than 60 years. Yet, this stadium is now demolished and Tottenham has to comply with a different reality that involves larger football fields such as the Wembley until 2019 and the new stadium from that year and on.

The main goal of this research is to project the estimated points of Spurs in Premier League taking into consideration the performance that the team had on previous year in smaller and in larger football fields.

The research is divided into three parts:

In order this research to be valid the researcher took into consideration that the club after three years of the same football style will not proceed into alterations until the end of this season. Moreover, the football field sizes in the Premier League are complied with the pitch and goalpost dimension rule (The FA, 2016). This research uses the sizes of the Football fields for the season 2016/2017 (Football Stadums, 2016).

Part I: The testing hypothesis

A very important starting point of this research is to explain which football field is small and which is large. A football field that could be characterized as small has to be less that the Median of all the football fields. The Median of this data range it is estimated at 7140 m². Therefore, every football ground that is less than 7140 m² is considered as a “small” and every football ground that exceeds this number is considered as “large”. The usage of Median here is very helpful because the numbers are very close and there are no outliers.

Tottenham Hotspur in the season 2016/2017 played 27 out of 38 matches in small fields and only 9 matches in large fields. This number is completely different this year in which the Spurs use as a home ground the Wembley. This season the club has to play 30 matches in large football fields and only 8 in small ones. In the table above you can compare the football field sizes for Premier League teams in the 2016/2017 season and the 2017/2018 season. The table shows that the club’s home ground size has been skyrocketed from 6700 square meters to 7140 square meters. Consequently, the team should cover more field especially to the sides to break the opponent’s defense.

In 2016/2017 season the Spurs have gathered a total of 86 points. The team won 26 times, while 8 matches finished as a draw and only 4 matches as a defeat. The graph above shows that the Spurs gathered 1.0 point less in average in large fields than the small fields; this number is huge taking into consideration that the team was fighting for the title.

From the analysis above, it is illustrated that Tottenham cannot compete the same in a large and in a small football field according to the 2016/2017 statistics. Consequently, the fact that the club moved to Wembley, one of the largest stadiums in England, will affect its performance deeply if the team’s playstyle will remain the same. The second part is going to estimate the gratitude of this effect to the Tottenham’s gathering points at the end of 2017/2018 season.

Data Science has been evolved into one of the most critical tools in every industry, including sports analytics (Harvard Business Review, 2014). In this case study, using rigorous statistical methodology, the researcher will project the estimated average points of Tottenham Hotspur for the season 2017/2018.

After the projection of a season the points will be kept in two lists, one for small fields and one in large fields. The simulation will run for 1,000,000 times. The number is high enough in order the data range to be normally distributed and the number to be even more precise. In other words, this small part of code will simulate the Premier League one million times and get the projected average points for Tottenham in 2017/2018 season.

You may find the code here.

The simulation showed that Tottenham will finish the season with 47.86 points in large fields and 18.02 points in small fields. In summary, it is projected that Spurs will gather 65.88 points in the season 2017/2018 based on their performance in 2016/2017 season in these two categories. The number is significantly lower than the last year’s gathering points (86). The decrease is 20.12 points. Tottenham is projected to gain 23.8% fewer points than last year.

These 65,88 points are going to affect Spurs in championship standing. This last part of this case study compares this projected point with some significant averages from the past years in Premier League. 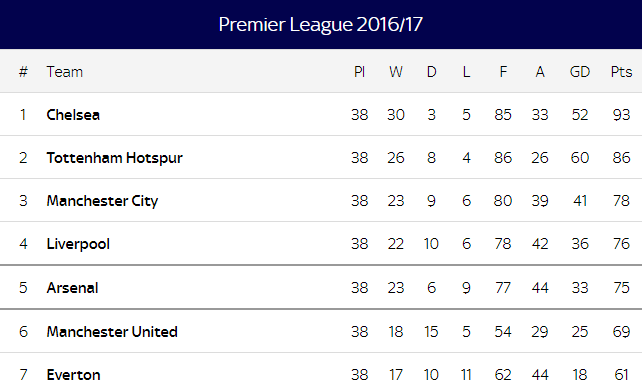 The 2016/2017 Premier League standing shows that 86 points were enough for the Spurs in order to reach the second place and qualify for the Champions League. If Tottenham had gathered only the projected 66 (≈ 65.88) points then the team would have finished 6th in last year’s Premier League. This fact means that M. Pochetino’s team would have fight to enter the group stage in the Europa League since the early summer. In other words, White Hart Lane size played the most important role for Spurs in order to compete for the Championship title and qualify for the next year’s Champions League.

Another important indicator that shows the magnitude of the decision to move to a larger stadium is the comparison with the average of the points per spot since the Premier League in season 2000/2001. The graph above shows the variation of every spot through the years. The average per each table place is presented in the table below.

Therefore, the Spurs with the gathering of projected 66 (≈ 65.88) points, could not look further than the 5th place at the final table. In some cases, these points are not enough even for the 6th place. In both scenarios, Champions League qualification is out of question.

To summarize, the data says that Tottenham will face many difficulties this season to compete not only for the championship crown but also for the Champions League qualification. The lack of effectiveness in large football fields cut almost one quarter of the points the team was gathering the previous years and Mauricio Pochettino is the only responsible to change that situation.

Express, 2017. Premier League clubs ranked: Which side has the largest pitch?. [Online]
Available at: https://goo.gl/P9yqmZ

Football Stadums, 2016. Are All Football Pitches The Same Size?. [Online]
Available at: https://goo.gl/rHyiov

Squawka, 2017. Explaining why Wembley’s pitch size is such a serious issue for Spurs. [Online]
Available at: https://goo.gl/aRgBLo 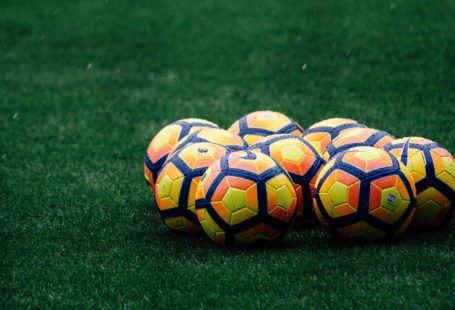 The Inferential Analysis of Monthly In-Game Form in Football